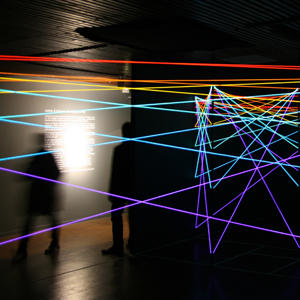 Aether & Hemera is a multi-disciplinary art and design studio, producing work that lies at the intersections of contemporary installation, lighting art and interaction design.

Founded in 2008 by Gloria Ronchi and Claudio Benghi, the duo often utilises the medium of light combined with digital media to create engaging spaces that connect people with their environment

Gloria has a mixed background in science (MSc, Politecnico di Milano, 1999) and the arts (MA, Brera Fine Art Academy, Milan, 2004), developed through her education as well as her practice.

Claudio trained as an architect at Politecnico di Milano, where he later obtained his PhD (2007), specializing in media architecture. Since 2009 is Senior Lecturer at Northumbria University (UK).